To get info for your location, Why select a state?

As a payroll reporting customer, the ICW Group Insurance Companies PayPro system simplifies your reporting process. No more paper necessary – payroll entry and payments are a breeze! See our helpful resources below. If you have any questions, call us at 858.350.7399 – we’re happy to help! 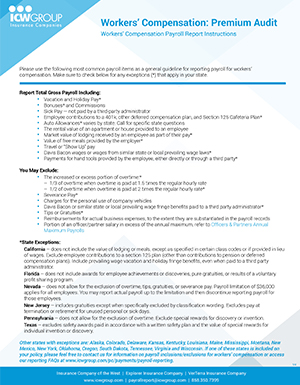 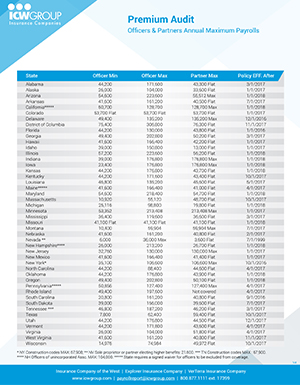 Lists the maximum payrolls for officers and partners in each state.
Download PDF

See exceptions in all states

Arizona Do not include the value of lodging in payroll, except as specified in certain classifications. The value of meals should not be included. Exclude only Davis Bacon fringe benefit payments paid into an ERISA qualified third-party pension plan.
California Do not include the value of lodging or meals, except as specified in certain class codes or if provided in lieu of wages. Exclude employee contributions to a section 125 plan (other than contributions to pension or deferred compensation plans). Include prevailing wage vacation and holiday fringe benefits, even when paid to a third party administrator.

See the California Time Record Requirements (PDF). If the auditor is unable to verify classifications at the time of audit, all payroll must be placed in the highest rate, regardless of the wage level.
Colorado Davis Bacon Act fringe benefits provided separately by employer should not be included.
Florida Do not include awards for employee achievements or discoveries, pure gratuities, or results of a voluntary profit sharing program.
Kansas Can exclude Vacation, Holiday or Sick pay if shown in records.
Kentucky Payments/allowances for hand tools should not be included.
Louisiana Exclude special reward for achievements or discovery, pure gratuities or the result of voluntary profit sharing arrangements if not part of an employment contract.
Mississippi Include expense reimbursement if records do not confirm expense was incurred as a business expense.
Nevada Do not allow for the exclusion of overtime, tips, gratuities, or severance pay. Payroll limitation of $36,000 applies for all employees. Report actual payroll up to the limitation and then you may discontinue reporting payroll for those employees.
New Jersey Include gratuities except when specifically excluded by classification wording. Exclude pay at termination or retirement for unused personal or sick days.
New Mexico Bonuses paid under a state approved safety program should not be included.
Oregon Do not include vacation pay or unanticipated bonus pay, amounts payable under profit sharing agreements or payments that are part of a program to reward workers for safe working practices. Only Davis-Bacon fringe benefits paid into an ERISA qualified third-party pension plan may be excluded.
Pennsylvania Do not allow for the exclusion of overtime. Exclude special rewards for discovery or invention.
Tennessee Include bonuses only when paid in lieu of wages and specified as a part of a wage contract.
Texas Exclude safety awards paid in accordance with a written safety plan and the value of special rewards for individual invention or discovery.
Virginia Do not exclude Davis-Bacon wages even when paid to third-party pension trusts.

For answers to your questions, check out the Payroll Reporting FAQs ›

For information on final audits, check out the Your Final Audit Page › 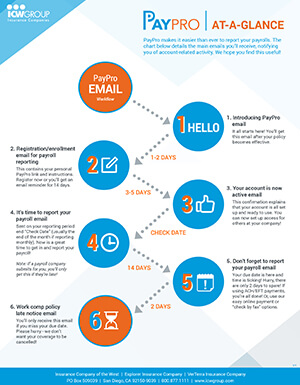 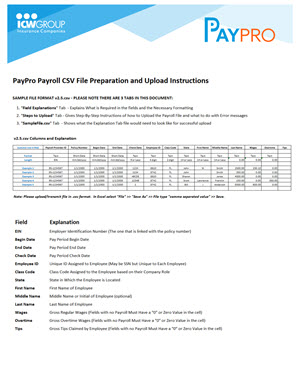 For more help with PayPro, check out the Payroll Reporting FAQs ›

Selecting your state enables you to view state-specific information, such as claims materials and forms. You can choose a different state at any time.